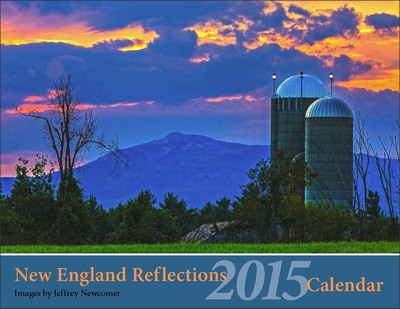 My photography focuses on the timeless beauty of our special corner of New England. In recent years, I have tried to augment my images by posting a weekly blog about the art of landscape photography and my "Getting It Right in the Digital Camera Blog" now includes more than 200 articles. Several of this year's calendar pages include links to blog articles that expand on the brief descriptions found with each image.
Check out the links below for more information

January : Snowy Breach, Spofford, New Hampshire
Spofford Village hugs the banks of Partridge Brook as it drains Spofford Lake. The flowing water was used to power various manufacturing, but now only the breached mill dams remain to recall the village's industrial past.

Photography Around My Own Neighborhood

February : Winter Fence, Pomfret, Vermont
Possessing some of the prettiest farms in the region, the quiet bucolic atmosphere of Pomfret, Vermont contrasts with the bustle of nearby Woodstock.

March: Nailed, Rye Harbor, New Hampshire
Last winter saw one of the biggest "irruptions" of Snowy Owls in recent memory. The birds displayed remarkable tolerance toward the hordes of visitors who came to enjoy their simple beauty.

May: Breakfast Club, Peacham, Vermont
Peacham, Vermont has been called the most photographed small town in New England. The claim may be disputed, but there is no argument about the town's classic New England beauty.

August: Marshall Point Fire, Port Clyde, Maine
Marshall Point Lighthouse has marked the entrance to the fishing village of Port Clyde since 1857. It is famous for the long walkway leading to the light, which was featured in the movie "Forrest Gump".

Camden and the Middle Coast of Maine

Get Yourself Some Farms

October: Green River Autumn, Guilford, Vermont
The Green River Covered Bridge was built in 1873. For more than a century the bridge has been a key part of this quintessential New England village.

Everything New England in One Place

November: Brittle Glory, Spofford, New Hampshire
After the autumn drop, it is time to take a breath and get ready for the long winter months. Now if we can only get all those leaf peepers to help with the raking.

December: Light on the Hill, Spofford, New Hampshire
Holiday lights can produce joyous statements of personal creativity, but I prefer low key lighting that speaks more of the welcoming warmth that marks the season.

Getting the Most from Christmas Light Photography